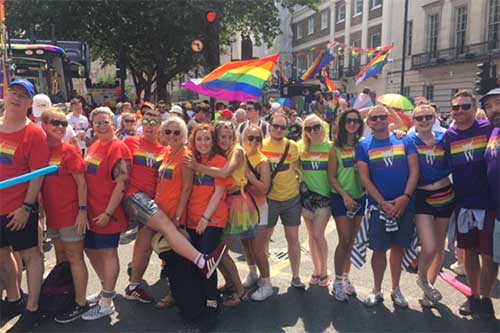 On Saturday 7 July members of the Whittington Health Inclusion Network joined nearly 30,000 other people marching in this year’s Pride in London Parade.

On Saturday 7 July members of the Whittington Health Inclusion Network joined nearly 30,000 other people marching in this year’s Pride in London Parade. They marched through the streets of Central London in front of an estimated 1 million spectators.
Pride in London is the biggest pride event in the UK. The parade provide a platform for every part of London’s LGBT+ community to raise awareness of LGBT+ issues and campaign for the freedoms that will allow them to live their lives on a genuinely equal footing.
As our colleagues walked the streets they were applauded and cheered. The crowd marked the NHS’s 70th birthday with several renditions of “Happy Birthday to You” to our section of the parade which featured many of our NHS partners.
The Theme of this year’s parade was ‘Pride Matters’. It was the 46th Pride in London Parade with the theme intending to draw attention to survey results that show that over 1 in 3 LGBT+ people have been verbally abused because of their identity, sexuality or gender. Norma French, Director of Human resources explains, “We know that people can only do their best work and make the fullest contribution when they are able to be their true and authentic self at work. We are proud of the diversity of our workforce but we are not complacent. We have more to do and we continue to work closely with colleagues in the inclusion network to ensure we are welcoming to everyone regardless of their sex, gender identity, race, ethnic origin or sexuality.”