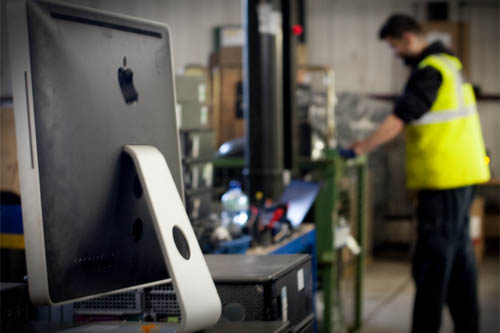 Old and redundant computers have been donated by Whittington Health NHS Trust to a charity which recycles them into life changing solutions for people living challenging lives here in the UK and across the globe.

Any PC, laptop or mobile phone will eventually come to the end its useful life. They slow down, parts break and eventually they have to be replaced. By working with our partners at CTR Group, old IT equipment from Whittington Health NHS Trust is taken away and rather than going to landfill it is repaired, recycled and donated to places that can make use of it.

In an average year the trust, which has over 4,000 staff, replaces around 350 PCs, as well as laptops and mobile phones. All hard disks are wiped by our IT team to ensure that no sensitive or private content remains on them before they are handed over to CTR. The company then shreds the hard disk to make absolutely sure that all personal information is destroyed before the machines are refurbished.

The equipment is then made available to a range of good causes. CTR have provided retired Whittington Health IT equipment to homeless shelters all over the UK so that people with nowhere to live can learn basic IT skills which will in turn help them to engage with the services they need, such as benefits or housing advice, as well as gaining skills to help them back into work.

Later in the year the trust will be replacing its current stock of mobile phones to allow us to use new clinical systems which require more modern handsets. This will not only improve the care that our patients receive, but our old phones will be provided to midwives in Africa to enable them to provide better care to theirs. African midwives are very often responsible for patients spread across a large areas – sometimes 50 miles – and have no means of communication.  The smart phones that we provide can be used gain quicker access to patient records which means they can administer medication and vaccinations rapidly and more efficiently, literally saving lives.

Our refurbished laptops are now also included in the “School-in-a-Box” project, supported by various worldwide charities including UNICEF. Materials for an entire classroom are packed into a large portable aluminium case. Alongside laptops the boxes include a clock, markers and flipchart, and even an inflatable globe for geography lessons! The inside lid of the box doubles as a blackboard when coated with the special paint included in the kit. Each school-in-a-Box helps at least 40 to children continue their education despite being in a war zone or an area where no school building was possible.

Andi King MBCS IT Assets & Contracts Manager for the trust explains that this isn’t simply about the trust doing the right thing for others, it also saves the trust money which can be reinvested into patient care: “If we were not involved in this scheme we would have to spend between Ł3-Ł5 per computer for it to be taken away and broken down for parts and recycling. That means that doing the right thing for others actually saves the trust over Ł1,400 per year. That makes it a win-win situation for us, for our patients, for people who need access to low cost computing and for the planet.”

Adrian Moore, Head of Business Development at CTR Group, proudly handles the Whittington equipment.  “I have been involved in IT recycling charity projects for over 15 years now, I had the privilege of working for 2 years with UNICEF and seeing first-hand the way used IT can change lives for the better.

“Organisations like Whittington Health NHS Trust and people like Andi and the team should be commended.  It is a privilege to know and work with them and I will be forever grateful.”

As part of the agreement with CTR, the company also remove and recycle any broken or obsolete landline telephones, printers and other peripheral devices which the trust would otherwise have to pay to be removed and disposed of.